The Shooting of Jordan Edwards: A Mother’s Day Lament 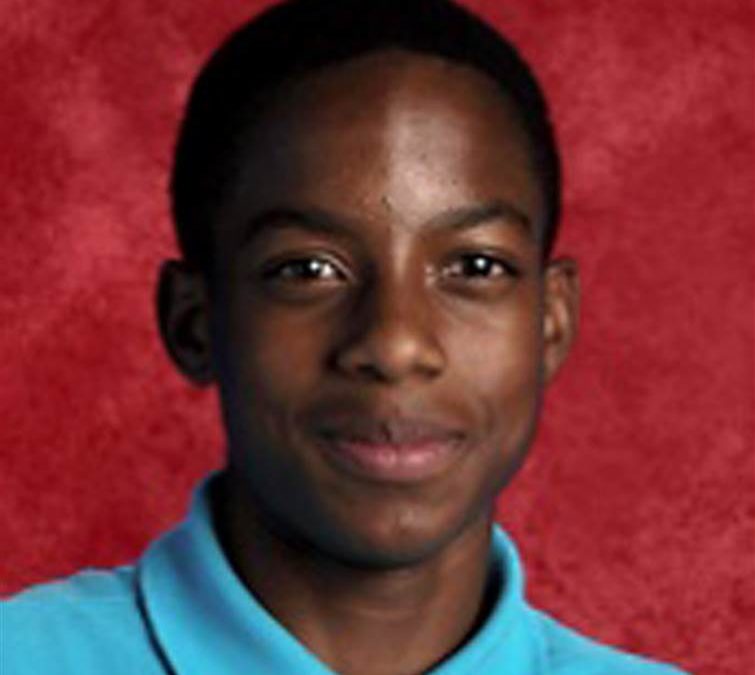 In his picture we see a handsome adolescent boy with a charming smile, his bright blue collared shirt buttoned up all the way. It’s an image that hints at all the goodness later revealed about the 15-year-old freshman. He was a strong student, a valued teammate, a kid others loved being around—every parent’s dream.

Then comes the dreadful news attached to the shining portrait: Jordan Edwards was shot in the head with a rifle by a police officer while a riding in a car that was driving away from a high school party. He died soon after.

Police quickly retracted the tale told to justify the shooting. No wrongdoing could be pinned on young Jordan. He was an innocent teenager.

It’s every mother’s nightmare—an adored child, slain violently and senselessly, his young life cut short, his parents unable to protect him from the danger lurking not far from home.

What could be worse?

Children of Color Imperiled
What makes the heartbreak worse is the reality that young people like Jordan, whose skin is black or brown, face a significantly heightened risk of dying at the hands of the state’s police power.

Several years ago, another unarmed black teenager, Michael Brown, was shot to death by a police officer in Ferguson, Missouri, sparking nationwide protests and eventually resulting in U.S. Justice Department findings of racial bias within the local police force. This incident and the succession of others like it in recent years have begun to raise public consciousness about what parents of color have long known: their children, especially but not only their boys, routinely face implicit bias, if not purposeful prejudice, which codes their color and gender as signs of dangerous criminality. Call it a presumption of guilt.

The tragedy is not only that Jordan Edwards’ parents now mourn the senseless death of their beloved son. It is also that every mother of a black boy or girl in this country must face the unthinkable reality that her child’s safety is ever tenuous, that those charged with protecting her babies are prone to view them with suspicion or hostility.

The raw, exposed nerve of motherhood is shocked by this cruel truth.

A Mother’s Day Lament
At least, that’s how I imagine it must feel.

Truth be known, I have no children of my own, and the baby brother I bounced on my lap when I was still small has long outgrown my mothering. Here in my homeland, no one calls me “Mama.”

Yet all the maternal instinct dormant within me flashes to life when I see Jordan Edwards’ picture and read of his tragic death. Tears flow insistently, angry mother tears, tapping into my memory of a place where I was somehow “Mama” to elderly widows and young children both. I flash back to East Africa, where this title of honor was not reserved for kin but generously bestowed on any who had shown motherly care. My memory returns to a gracious introduction: “This is our mother, this is the one who has been helping us.”

The mother’s heart within me yearns first to grieve the crisis of lethal government force claiming young, black lives in our country. But soon it yields to probing thought, as I consider how this injustice violates our most sacred values, as Americans and as Christians.

The United States has repeatedly pledged to root out the racial disparities that continue to disgrace our criminal justice system. Arbitrarily violating African Americans’ most fundamental human right—the right to life—offends our most cherished constitutional principles and many an international commitment. As a participant in the human rights treaty on ending racial discrimination, our country has vowed to protect each person’s “right to security of person and protection by the State against violence or bodily harm,” including harm inflicted by government officials like the police.

But the group of experts charged with assessing whether countries are keeping their promises under the treaty is concerned about racial bias in our criminal justice system. In a 2014 report on the United States, it expresses alarm at

“the brutality and excessive use of force by law enforcement officials against members of racial and ethnic minorities, including against unarmed individuals, which has a disparate impact on African Americans….”

Though some still debate whether the successive police killings of unarmed black boys and men that have dominated American public discourse in recent years are related, this expert body rightly names a distressing pattern and calls our nation to do better.

As people of faith, we should welcome this accountability and demand that our leaders make good on our collective promise not to discriminate based on color—either in what we’ve done or what we’ve left undone.

The Need for A Christian Response
From a Christian perspective, murder offends the special, sacred worth bestowed on human life by the gracious love of God. Jesus warned that not only murder is sinful, but also the seed of angry animosity from which it grows. (Matthew 5:21-22) Conquering such hatred—prejudice, however unconscious, that devalues human beings formed in God’s image—remains central to the work of justice in our age.

What struck me most painfully as I took in the story of Jordan Edwards’ death was the conviction that I had not, in fact, been a mother to boys like him—which is to say, I had done nothing thus far to resist the tide of lethal violence claiming black lives in our country. Jesus ended the story of the Good Samaritan by asking which of the three passers by had been a neighbor to the man in need. (Luke 11:36) In the same way I imagine Christ asking us, “Who do you think was a mother to these children?”

As Christians, we should be doing all we can to champion reform of a system that claims the lives of too many young ones, that sends the invidious message that some lives are less dear than others. For those of us in the white majority, this demands caring about the death of Jordan Edwards as if he were our own. It demands proclaiming that he was our own—our fellow human, our promising young countryman, our neighbor’s son.

As Christians, we are called to love our neighbors as ourselves, to treat them as we would wish to be treated.

Who doesn’t wish for her child to be safe, and to live?