To Affirm the Death Penalty Is to Reject the Christian Gospel 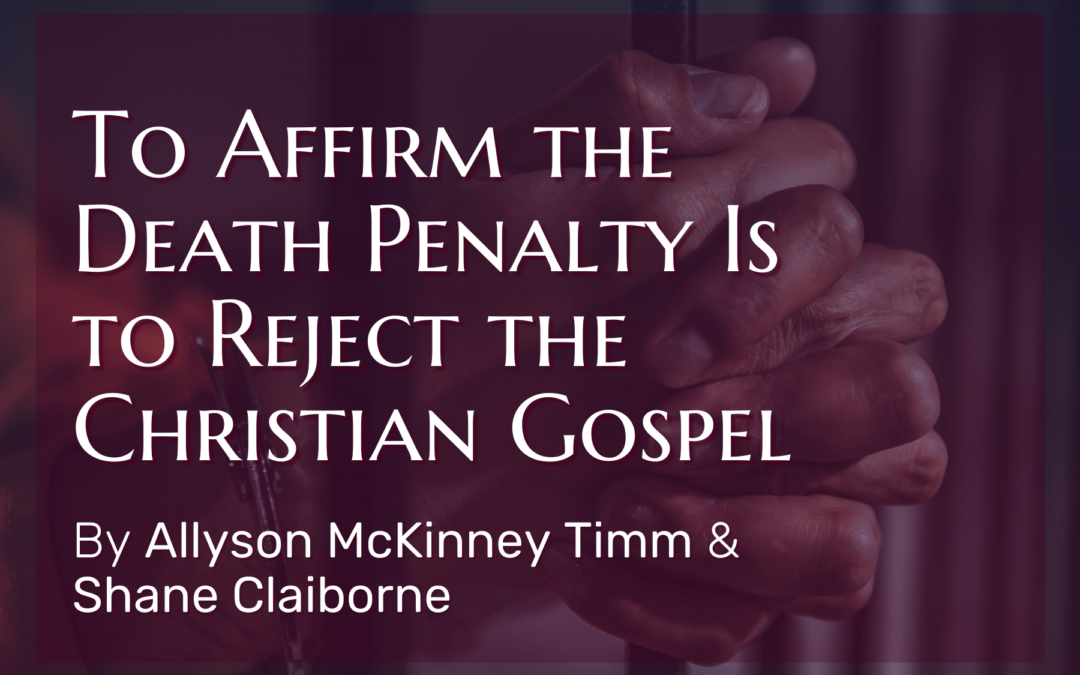 Recent weeks brought temporary reprieve for Melissa Lucio when the Texas Court of Criminal Appeals stayed her execution–just 48 hours before the state was to put the 53-year-old Catholic grandmother and mother of 14 to death by lethal injection. Lucio’s numerous supporters heaved a collective sigh of relief and she rejoiced at having more days ahead to share her faith with her family. But the anguish will surely grind on as long she remains on death row.

The intensity of Lucio’s brush with death in the face of breathtaking evidence of her innocence is startling. Experts like Professor Sandra Babcock and The Innocence Project insist Lucio was convicted for a crime that never occurred, pressured into a false confession and scapegoated by a corrupt prosecutor. Yet despite the flimsy case against her, it took a documentary film seen by millions, a massive local public education effort featuring Lucio’s family, tens of thousands of signatures, half the legislators in Texas, and celebrities like Kim Kardashian to stop this execution. Stays like this one are not the norm in Texas, which leads the nation in executions, and rarely lead to a reduced sentence.

Moreover, near misses like Lucio’s are an ominous recurrence in a nation where the federal government, military tribunals, and 27 states still use capital punishment, against the admonition of global human rights authorities and in contrast with nearly all liberal democratic societies. Ranking in the ignoble Who’s Who of nations that most frequently put their citizens to death, the U.S. stands in the bad company of authoritarian and pariah states like China, Iran, Saudi Arabia, and North Korea—a fellow outlier on a core human rights issue that’s drawn burgeoning consensus over the last seven decades.

U.S. insistence on modern day death chambers poses a host of moral problems beyond the risk of a flawed human system catching innocents like Melissa Lucio in its fatal grip. In addition to condemning 187 defendants who were later fully exonerated, our state and federal governments have executed at least 42 intellectually disabled and 22 who committed their crimes as minors—killings our Supreme Court has since summoned the scruples to deem unconstitutional.

The Court has not, however, seen its way clear to safeguard against the indisputable racial disparities in capital punishment, by which Black defendants are far more likely to be executed, especially when Whites are the ones victimized. Poverty is a risk factor, too, and idiosyncrasies of state and local politics and officials’ views play an alarming role in meting out the ultimate, irreversible form of retribution.

The U.S. has refused to respect global human rights norms that limit capital punishment to the most extreme cases. Texas proceeded with executing Carl Buntion last month at the age of 78, despite his physical infirmities and evidence that people his age are rarely violent. One treaty repudiates the death penalty for those aged 70 or older, but that was no matter.

It’s not only the execution of innocents that should haunt us. It’s the specter of Richard Moore choosing a firing squad over electrocution, and the excruciating lethal injection of prisoners caught between a drug industry that objects to its medicines being used to lethal ends and officials fixed on finding a path to execution, even through shadowy or unregulated means. Oklahoma injected one poor soul with a chemical used to de-ice airplanes. His last words were, “It feels like my body is on fire.”

We need a broader moral reckoning on capital punishment—in the Bible belt, in particular. In a recent forum, we zeroed in on the challenge of problematic theology, which in Shane’s words has turned the Bible Belt into a “Death Belt,” giving moral cover to a lethal human rights violation. Southern states where Christianity predominates are the ones holding fast to the death penalty and using it most often. Last month four executions were scheduled—two in Texas and one each in Tennessee in South Carolina—during a season where Christians everywhere celebrated resurrection.

A 2021 Pew Research study found that White Protestants are the most ardent supporters of capital punishment (nearly three quarters approve), and that Atheists and Agnostics are the only groups to disfavor it. Catholic support at 58% is nearly on par with the national average—despite Pope Francis renouncing capital punishment altogether, thanks to the tireless advocacy of Sister Helen Prejean and her fellow advocates.

As lifelong Christians who hail from the Deep South, we know how values of personal responsibility plus law and order can be warped into religious fervor for lethal retribution. Yet even the most rigid interpretations of a Christian message are impossible to square with the death penalty. Though not all Jesus followers embrace penal substitutionary atonement (the belief that Jesus’ death was necessary to save humanity from sin), a great many do. The good news is that, taken seriously, it could be the undoing of American bloodlust.

If the primary significance of the crucifixion is redemption from our sinful human nature and an invitation to reconciliation with a loving God, we mock the Author of this plan by declaring that Carl Buntion was no longer worth Christ’s effort. If we dismiss a fellow human being as beyond redemption, we may as well look Jesus in the eye and tell him, “Sorry, your tortuous sacrifice is not good enough for my taste.” To insist on death as retribution is to reject the Christian Gospel of salvation.

And ultimately, that’s the problem, isn’t it? We try to reject it, time and again. The deep difficulty many Christians have with the Gospel is not believing it but truly “accepting that we are accepted,” to paraphrase Fr. Richard Rohr, through no merit of our own. Such grace, he explains, is the death knell of our striving egos, the ultimate expurgation of our false, temporal selves. If our eternal, spiritual side could receive the hope of salvation, enjoy its truth in our innermost being, we would shudder at the thought of putting a fellow sojourner to death.

If we believed Jesus’ words, “It is not the healthy who need a doctor, but the sick,” we would cherish the lives of those whose past misdeeds lay bare the universal need for saving grace. The New Testament gives us a parent rejoicing over the return of a wayward child with a relish that leaves others in disbelief. Divine hope in the redemption of the most culpable criminal—or of you and of me—never gives out.

If we were to look carefully at scriptures invoked to justify lethal retributive punishment, as scholar David Gushee has, we would learn that early communities of interpretation came to understand them as “putting a sacred protective boundary around the life of the human being,” rather than demanding further violence.

What’s more, the sum of the biblical narrative bespeaks a value and worth to each and every human life, in God’s eyes, which has influenced the course of history. It has helped to birth the revolutionary conviction that certain principles for how we treat one another are sacrosanct. For the human right to life to mean anything, it must mean the powerful hand of the state is restrained from striking down one of its own—an image bearer of a merciful God—in the name of justice.

Allyson McKinney Timm is a human rights lawyer, scholar, and faith leader who serves as executive director of Justice Revival, a Christian voice for human rights in the United States. Her writing on an array of justice issues has appeared in Baptist News Global, The Columbus Dispatch, Sojourners, and Yale Divinity School’s Reflections magazine, among others.

Shane Claiborne is a prominent speaker, activist, and best-selling author. He heads up Red Letter Christians, a movement of folks who are committed to living “as if Jesus meant the things he said.” Shane’s books include Executing Grace: How the Death Penalty Killed Jesus and Why It’s Killing Us.