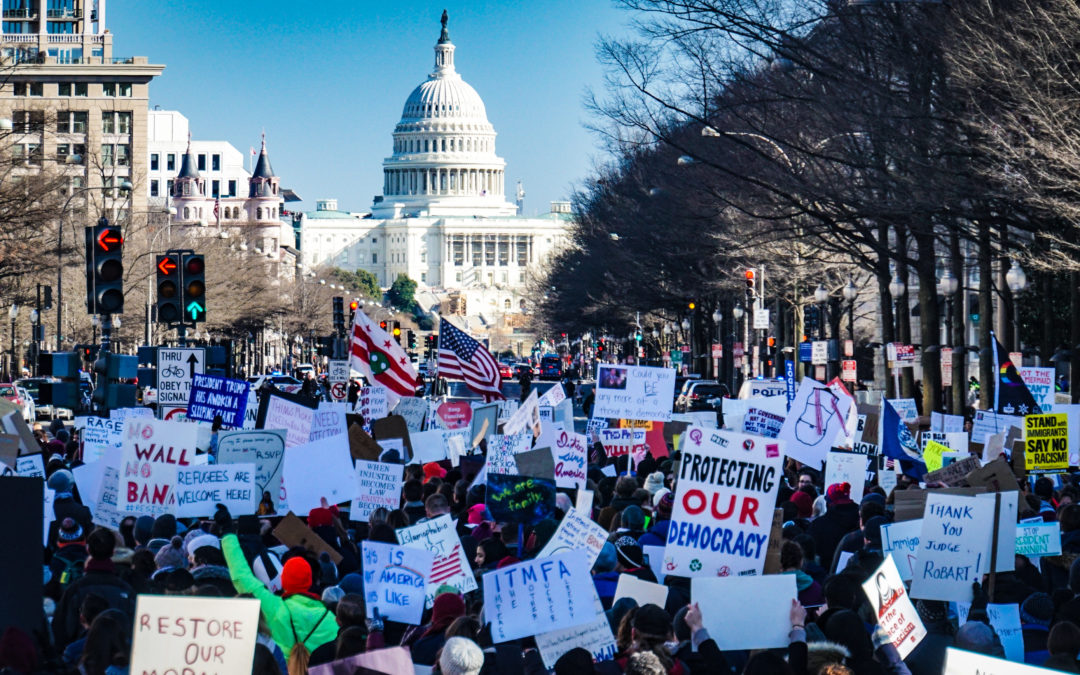 For the last four years the United States has suffered a presidential administration truly extraordinary in its disregard for civil and human rights. As this wearying year draws to a close and Human Rights Day dawns, we are understandably longing for a more righteous era to come. But if we rush to catharsis, we risk missing the insight these difficult years can offer. It’s worth pausing, on this historic day, to seek a clear-eyed view of the truth about our nation’s moral fabric and its potential to realize or to undermine essential human rights.

Our faith can help us face difficult truths with brave honesty, choosing a path of open confession, genuine contrition, and commitment to reform over the seemingly self-protective denial that can be far too tempting, for individuals and communities. We’ve heard it said, “… you will know the truth, and the truth will set you free.” (John 8:31)

So let’s be honest, America: the outgoing administration’s transgressions were not cut from whole cloth; no, they were stitched together from banners of past and present campaigns of injustice, embellished with gaudy new trimmings. It’s as if someone found artifacts of a family’s unsavory shadow side tucked in attic corners, then made a mammoth quilt of them and hung it over the front bannister, bedecked with Christmas lights. For the last four years, America’s sins have been on display.

When history looks back on 2020, it will recall the merciless police killing of George Floyd, which sparked national and global protest against racist state violence. Some may credit this year as one when many became more conscious of the sordid history of extrajudicial killings of Black Americans, like the 2012 murder of Trayvon Martin and acquittal of his killer, which catalyzed the Black Lives Matter Movement, or generations earlier the horrific lynching of Emmett Till, and countless others before him. This year it seems many awakened to the true and present threat to Black lives, which has always belied the myth of America as human rights ideal.

In recalling 2020, human rights scholars will explore the extraordinary session of the UN Human Rights Council last June, which began with rare victim testimony by George Floyd’s brother, Philonise, pleading, “I appeal to the United Nations to help him. Help me. Help us. Help Black men and women in America.” They will examine the formidable triumph of civil society groups that demanded the hearing, and perhaps include embarrassing reports of U.S. diplomats pressuring African nations to soften their demands for accountability. Our government ostensibly used foreign aid to poor countries as an effective carrot to staunch pan-African solidarity and blunt the consequences of lethal injustice against people of African descent.

The recently defeated president has stoked racism shamelessly, denigrated all manner of non-White people groups, and used tear gas on peaceful protesters so he could brandish the Holy Bible like a cheap prop. His brazenness makes it easy to cast him as the face of our transgressions, the embodiment of our iniquities—but can we also see our own part in America’s tragedy? With scores of confederate statues and emblems enduring till this year, and a criminal justice system that evinces racism at every stage, our nation’s collective past and present served up plenty of kindling for the White supremacist fire.

The year 2020 will also be known for the COVID-19 pandemic and the inequities it laid bare. The pandemic swiftly unraveled the “model minority” trope and unearthed animus toward Asian Americans, who became targets of scapegoating and physical attack, spurred on by the slur “Chinese virus”. The lives claimed by the illness tell their own story—disproportionately Black, Indigenous, and Latinx, covid-19 fatalities revealed racial fault lines in the places Americans live and work, in lack of health care access and the purchasing power it demands. School children fell behind if their households lacked internet or computer access, reinforcing cycles of deprivation rooted in race, poverty, and geography. Shelter-at-home orders meant to safeguard health have been widely anticipated to render abuse victims more vulnerable to bodily harm.

Leadership failures left our country with the ignominious distinction of leading the global rise in covid-19 cases, plus a shameful record of quitting the World Health Organization at a moment when global cooperation to fight the pandemic was most urgent. It was one more step in the retreat from global cooperation.

Here, too, we should pause to ask how much is new under the sun. Our nation’s historic reluctance to recognize vital economic and social rights like the right to health care was a long-festering ailment waiting to be triggered. Our characteristic reticence to make and keep global commitments far pre-dated the present administration. Trump may have taken White nationalism, isolationist protectionism, and cruel destruction of our thin social safety net to new extremes, but he was only able to do so because the raw material lay waiting for him.

Equality Regardless of Sex

There were several bright spots on the horizon of human dignity, equality, and rights in 2020. The Supreme Court determined that civil rights protections against workplace discrimination “because of sex” extend to LGBTQ+ workers as well as women. Virginia became the 38th and last needed state to ratify the Equal Rights Amendment, which would bring the U.S. Constitution into line with the human rights principle that all are equal before the law. These gains are vital for those seeking a fair livelihood in the face of prejudice based on gender, sexuality, pregnancy, or parenthood.

Human Rights: Not Too Much to Ask

Rather than being forthright about the dilemmas and challenges that still impede justice here in our homeland, outgoing leadership presumed to redefine human rights for the world. On the same day the Kentucky attorney general announced no charges would lie against the officers responsible for killing Breonna Taylor in her own home, Secretary of State Mike Pompeo touted a report by his “Commission on Unalienable Rights” (CUR), widely panned by the human rights community, as a model for other countries to revise universal ideals in national terms.

The CUR had little to say about the domestic human rights crises described here. Instead it bemoaned the “proliferation” of rights—which is to say, the elaboration of human rights standards over the last 70 years—suggesting perhaps that humanity is asking too much by claiming a robust holistic concept of the good treatment all people deserve. But the promise of the kingdom of God heralds a radical vision of inclusion, provision, safety, and flourishing for all God’s children, and beckons us to believe this world is not only possible but palpable and imminent. Through the lens of Christian faith, respect for the full range of human rights for all people is not too much to ask—on the contrary, it is a moral bottom line.

A Plumb Line of Justice

Human rights provide a plumb line of justice, a shared standard distilled by consensus among diverse cultural traditions the world over. More than seventy years ago, the Christian ecumenical movement played a key role in advocating the historic document we celebrate today, the Universal Declaration of Human Rights. It is still the world’s signal proclamation of the privileges and freedoms all members of the human family should enjoy. As people of faith, we should be ready and eager to remind our government of its promise to protect these rights, and fearlessly welcome a truthful account of where our country has tried, progressed, failed, or refused to advance this mission.

Human rights represent a moral commitment to one another. Theologian Nicholas Wolterstorff calls them a “normative social bond”: a vision for relationships animated by justice and equity, a way of treating one another that fosters the flourishing of each one and redounds to the benefit of the community, too. How we respond to our fellow humans is a fundamentally spiritual matter, and true religion still holds precious potential to sound in harmony with human rights.

The relief of the Trump Administration falling away is welcome, but let’s not make the mistake of thinking now is a time to stand down. The moral and spiritual struggle of our lifetime continues. The great need remains—to make human rights real for those who need their protection the most. This is a promise America has made but not fulfilled. It is a promise worth keeping.