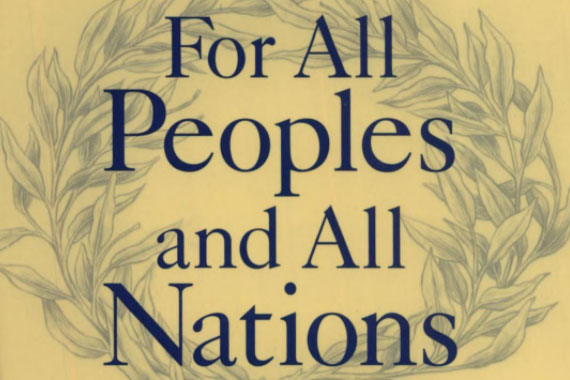 A Review of John S. Nurser, For All Peoples and All Nations: The Ecumenical Church and Human Rights

In For All Peoples and All Nations: The Ecumenical Church and Human Rights, John S. Nurser shows through historical study that faithful Christian engagement with global politics is possible when the Church consciously transcends national and denominational boundaries, listens to voices of the marginalized, and builds bridges with other faiths.

Nurser’s book is primarily directed towards academics rather than pastors and laypersons. He argues that “contrary to received opinion, the churches of the Protestant ecumenical movement played a significant role” in the drafting and adoption of the Universal Declaration of Human Rights (UDHR) (172). Nurser centers his story around the founding of the World Council of Churches (WCC) and highlights the work of key leaders such as O. Frederick Nolde of the Lutheran Theological Seminary in Philadelphia.

Chapters one and two introduce the ideology and major players in the ecumenical movement for human rights. The World Council of Churches was provisionally formed in 1938, bolstered by worldwide parachurch movements such as the YMCA, in order to address the global rise of totalitarianism and perceived impotence of Christian peacemaking efforts in World War I.

Christian leaders sought a new social ethic that focused on developing human potential. This effort required a vision of global ecumenism that eschewed imperialism; it also required O. Fredrick Nolde. Nolde’s commitment to developing the “Christian potential for human character” fueled his tireless efforts in networking and activism as a proponent of international human rights. He would eventually spearhead the research and educational efforts behind the WCC’s advocacy for a Universal Declaration of Human Rights.

Chapters three through ten focus on the historical “battles” waged by the WCC and its sister organizations throughout the 1940s. First, proponents of a postwar global order had to decide what goals to prioritize: varied (and sometimes competing) interests included ensuring a “just and durable peace” at the end of the war, protecting missionaries abroad from governmental constraints on proselytizing, and developing an international body to adjudicate disputes over human rights violations and potentially enforce sanctions against offending nations.

Eventually, Nolde became convicted that religious freedom was only one part of a holistic bundle of human rights, all of which flowed from a Christian social ethic: this conviction laid the groundwork for Christian support for human rights.

During this time, the WCC began to incorporate “indigenous” churches from colonized countries: Indian missionaries believed that the UDHR could help combat colonial abuses. The WCC and its sister organizations began to work with Roman Catholic groups influenced by Jacques Maritain and Jewish groups intent on preventing another Holocaust. The conversation included Islamic voices from Middle Eastern countries, whom Lebanese Christian philosopher Charles Malik convinced to support the UDHR’s religious liberty provision because Islam, too, is a missionary religion. This represented one of the first global interfaith movements in world history.

Although Nolde and his associates never saw a UN judicial body with mandatory, universal jurisdiction or enforcement powers, the UDHR remains one of the most important and influential international documents ever created. Nurser recounts the many times it nearly foundered, in light of nationalist opposition from the United States, Russia, and several Middle Eastern countries. But the diligent work of global religious leaders from across the world helped to provide the framework for the future of international law.

Today, however, the global ecumenical movement does not have the political clout to achieve something of this magnitude, Nurser contends. He points to the War on Terror as a substantial impediment to global ecumenism and the rise of nationalist religious movements around the world that often eschew international political organizations.

Ultimately, For All Peoples and All Nations reminds us that Christians can work alongside those of other faiths and other nations to effectively advocate for the rights and dignity of all. Perhaps this fact can serve as a rallying point for the future of Christion human rights advocacy, as we remember that ecumenism and persistent commitment to human rights are essential.