Highlights from our Voting Rights event: The Right on which All Others Rest 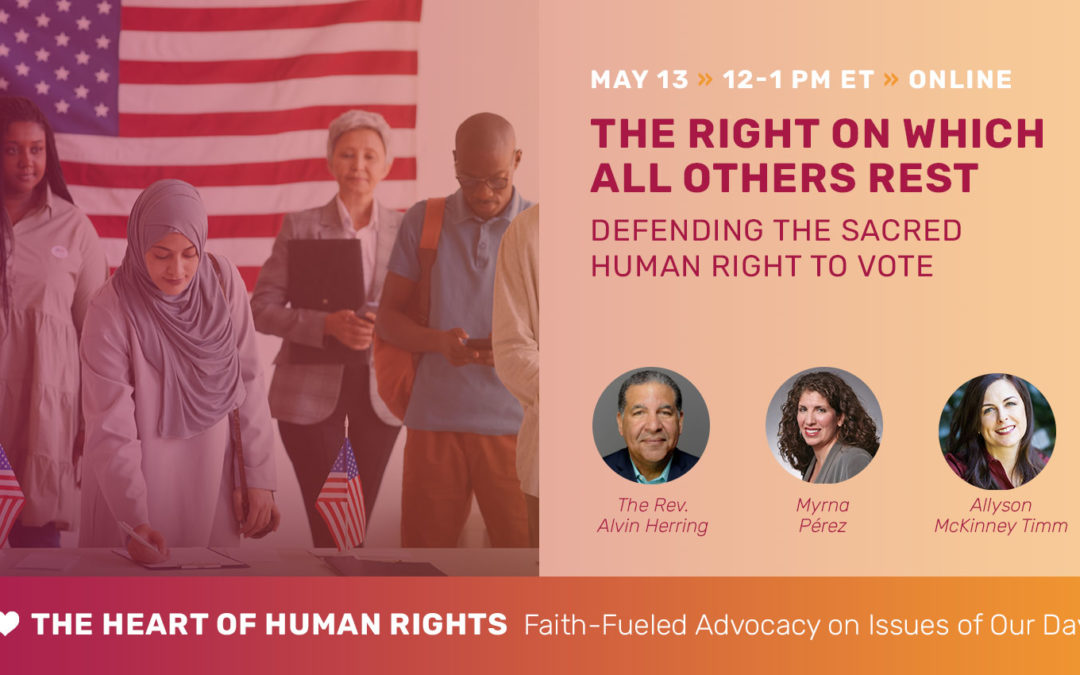 At the voting rights event Justice Revival hosted recently, Rev. Alvin Herring of Faith in Action shared a personal account of how America’s history of racist voter suppression has affected him and his family. He described how his father, born in Alabama in 1922, did not have the opportunity to vote until after he left the state in 1957, given the lurking threat of violence against Black voters and discriminatory practices like poll taxes. When Herring himself voted for the first time, he burst into tears in the voting booth, as he recalled the struggles his parents faced in trying to exercise this sacred human and civil right.

Myrna Pérez of the Brennan Center for Justice offered a historical perspective on the voting rights struggle in this country. She explained that even though the post-Civil War Reconstruction amendments were meant to extend the franchise to formerly enslaved African American men, many were “literally hunted and murdered for asserting their right to vote.” This violent and oppressive history set the stage for the Civil Rights Movement of the 1950s and 60s, and one of its most successful legal reforms: the Voting Rights Act of 1965 (VRA), which gave the 15th amendment teeth.

Pérez and Herring spoke with Justice Revival founder Allyson McKinney Timm at the recent web-based event, “The Right on Which All Others Rest: Defending the Sacred Human Right to Vote.” The conversation covered the past, present, and future of voting rights in the United States and the call to people of faith to aid in the struggle for equal suffrage. Watch the full video here and read on for more highlights.

The Gutting of the Voting Rights Act

The VRA prohibited and effectively blocked state voting laws that resulted in racial discrimination against voters of color—regardless of the intention behind those laws. In just five years after the VRA was passed, the percentage of voting age African Americans registered to vote in the South increased by 30 points.

Unfortunately, however, the Supreme Court struck down the VRA provision (called “preclearance”) responsible for proactively preventing discriminatory state laws from being passed.  At the time Justice Ruth Bader Ginsburg likened this to “throwing away your umbrella in a rainstorm because you aren’t getting wet.” This 2013 decision—in a case called Shelby County v. Holder—gutted the VRA of a powerful tool to defend the right to vote in states that historically had been the worst offenders.

Voting: “The Right on Which All Others Rest”

Voting is both a fundamental human right in itself and a vital tool to secure other rights—often called “the right on which all others rest.” The United States has promised to respect and protect this right in multiple international treaty agreements.

But communities of color and low income voters still endure unjust obstacles to making their voices heard at the ballot box. And since the 2020 election, numerous states have been considering and passing laws that would increase these burdens. State legislators have introduced 361 restrictive voting bills in 47 states, including the draconian Georgia measure which outlaws giving food and water to people waiting in line to vote.

Another major impediment to universal suffrage in the United States is the disenfranchisement of formerly incarcerated voters, which affects people of color disproportionately. Both Herring and Pérez cited this as problematic; indeed, numerous human rights bodies have criticized the practice.

Herring and Pérez both gave the United States decidedly poor marks on the 2020 election. Herring assigned a failing grade because of the difficulty still faced by many in marginalized communities attempting to get to the polls. Pérez gave the U.S. a “D” because despite record turnout in 2020, only around sixty percent of eligible citizens voted. “There’s no aspect in our life where we’d be comfortable with a one out of three failure rate,” she explained.

Living Our Faith, Protecting Our Neighbors

Recognizing the inherent dignity of our neighbors includes affirming and protecting their right to vote, the means by which their voices can be heard in our democracy. Faith in Action, for instance, is working to help Black and Indigenous voters through its Rise + Vote campaign, a comprehensive education, registration, and mobilization effort. The group held 2 million conversations with voters ahead of the 2020 election, seeking out those overlooked by other voter outreach programs.

He explained that his faith calls him to do the work necessary to ensure everyone has an equal right to vote.

Pérez is similarly moved by her Christian faith to take action to protect voting rights: “I think we all know that [ultimately] love and justice wins, and we need to be using our hands to write the middle of the story.”

Hope on the Horizon

Fortunately, two pieces of legislation hold promise to better protect Americans’ right to vote: the For the People Act (H.R. 1) and the John Lewis Voting Rights Advancement Act.  The For the People Act, recently passed by the House of Representatives, would expand voting rights in a number of important ways. It would restore the voting rights of people with past criminal convictions who have completed their sentences. It would also create national automatic registration for eligible voters, ensure at least 15 days of early voting nationwide in federal elections, and prohibit purging voter rolls, which often prevents eligible citizens from casting their vote. It would establish independent redistricting commissions to prevent partisan gerrymandering.

The John Lewis Voting Rights Advancement Act, passed by the House last year but not yet reintroduced, would restore and strengthen the crucial VRA provisions previously weakened by the Supreme Court in the Shelby v. Holder case.

Pérez emphasized that these bills are “two must haves,” which each accomplish crucial aims in securing the vote.