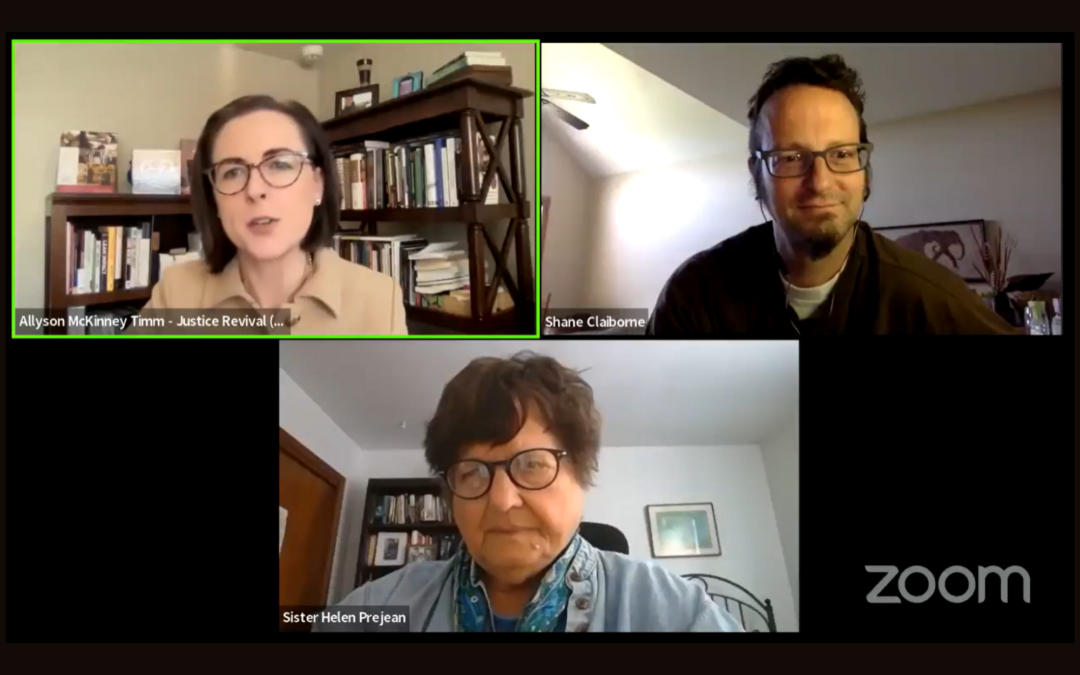 April 20, 2022 | Virtual – Over 250 participants are prepared to tune in on April 20, 2022 at noon Eastern to hear Sr. Helen Prejean, CSJ and Shane Claiborne, both internationally renowned death penalty abolition experts, discuss how capital punishment offends the Christian Gospel and the ideal of human rights – and how activists can work together to end it for good. The event is hosted by Justice Revival and will be moderated by human rights expert Allyson McKinney Timm. Registration is free and open to all.

With the looming executions of Melissa Lucio (TX), Oscar Franklin Smith (TN), Carl Wayne Buntion (TN), and Richard Moore (SC) all scheduled during a month when holy seasons of Passover, Easter, and Ramadan are being observed, many activists of faith are particularly motivated to take a stand against continued use of the death penalty. But Christians advocating for the punishment’s abolition are a minority within their faith.

A 2021 Pew Research Center poll revealed that U.S. Christians were more likely to support capital punishment than their agnostic and atheist counterparts. Nearly three-fourths of all White Protestants affirmed capital punishment for the crime of murder. By comparison, 58% of Roman Catholics, 43% of Agnostics, and just 35% of Atheists expressed support.

Prejean, Claiborne, and Timm are urging Christians and policymakers to turn away from lethal punishment and recognize the enduring value of every prisoner’s life.

Sr. Helen Prejean, internationally renowned for her accompaniment of death row prisoners and her book Dead Man Walking, has been instrumental in shaping the Catholic Church’s vigorous opposition to all executions. She said:

“Growing up in a privileged white family in Baton Rouge, Louisiana, I didn’t even know a poor person. I thought that the poor should simply accept their fate and be rewarded abundantly in heaven. But after moving to the New Orleans projects to live with the poor, I started writing to a man on death row. When I witnessed the torment of prisoners condemned to death, I could no longer stand by silently as my government executed its own citizens. If I did not speak out and resist, I would be an accomplice. This is what Christians and people of good will must realize: we are all worth more than the worst thing we’ve ever done in our life, and the death penalty cruelly violates the dignity of people whose lives matter to God.”

“The death penalty mirrors the violence we are seeking to rid the world of.  It does not heal the wounds of violence, it only creates new wounds.  We do not rape people to show that rape is wrong, and it is time to stop killing to try to show that killing is wrong.  Violence is the disease, not the cure. Killing is the problem, not the solution.  As a Christian, the death penalty raises one of the most fundamental questions:  “Is anyone beyond redemption?”  The death penalty denies the power of Christ to forgive and redeem every person, even someone who has committed murder.”

“Too often, Christianity is invoked to oppose rather than uphold human rights in the United States. One of the most egregious violations in our country is the state-sanctioned violence of capital punishment, which cuts against international law by violating the fundamental human right to life. Christian support of this cruel punishment must end if we are to truly live in to the Gospel’s call to love, justice, and mercy.”

Those interested in hearing more can register for the Zoom Webinar on Justice Revival’s website. The speakers will answer questions live during the event.

Justice Revival is a diverse, inclusive community of Christian faith and a leading voice for human rights in the United States. See the Justice Revival Press Kit.