After Roe: Prioritizing the Poor and Remaining Steadfast for Equality 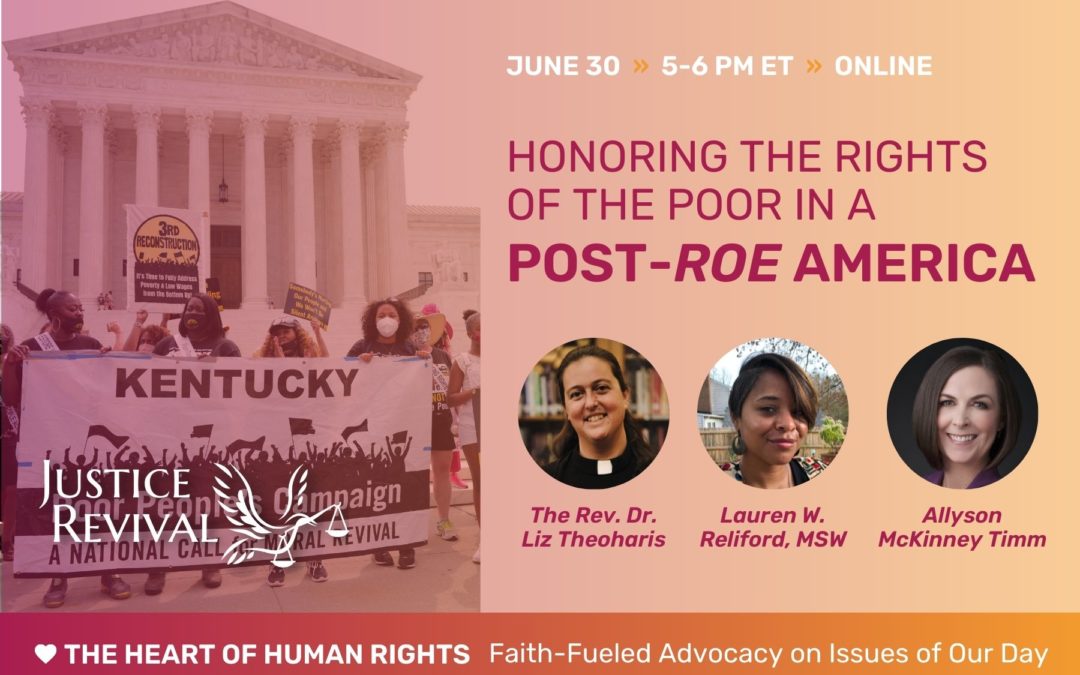 As we continue to absorb the striking news of the Supreme Court’s decision in Dobbs v. Jackson Women’s Health, we are especially concerned–as I know many of you are–about how this abrupt and dramatic shift in the law will affect the lives, families, health, and well-being of many who are already struggling on the margins.

Nearly three-fourths of abortion patients cite economic hardship as a reason for their decision, so the swift rollback of rights in states across the nation will weigh most heavily on poor and low-income women, women of color, younger women, and those in rural areas. Some folks seem only now to be waking up to the clear biblical duty to stand with the poor–when in truth if more Americans had taken this duty seriously, we might have reduced abortion dramatically without enabling the government to extend its hand of authority so forcefully into the intimate sphere of home and family life.

Please join us this Thursday at 5:00 pm as I host Rev. Dr. Liz Theoharis of the Poor People’s Campaign and Lauren Reliford of Sojourners to reflect on the growing human needs we expect to see in the wake of this decision, and our duty as people of faith to respond. The event is titled, “Honoring the Rights of the Poor in a Post-Roe America.” 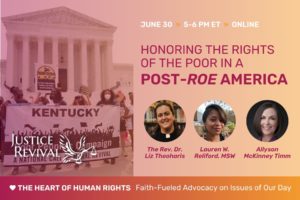 Dobbs v. Jackson also threatens Americans’ human rights in a host of other ways, beyond the reproductive sphere. As we anticipated, the Supreme Court reads the Fourteenth Amendment through a 19th Century lens, invoking an era when women were excluded from the vote and most rights of citizenship as the guidepost for its analysis. If this mode of decision-making continues, women could lose important gains of the last five decades–and all constitutional claims to Equal Protection. This decision has put the vital progress of recent generations at risk.

We are likewise concerned about legal reasoning that erodes protections for marriage and intimate relationships, threatening the recent extension of greater civil rights to the LGBTQ+ community. The human right to marry and found a family is clearly at risk–and with it, important goods like health insurance that may be threatened for affected families.

The Equal Rights Amendment is more vital and urgent than ever if we are to establish a legal order that respects the human dignity and worth of all people, regardless of sex or gender. That’s why Justice Revival continues to lead the charge within the #Faith4ERA campaign. This summer we’re expanding and amplifying calls to publish and recognize the ERA as the 28th Amendment to the U.S. Constitution. This is essential to ensure that women’s and LGBTQ+ rights are not further eroded. It is a basic and long overdue measure to acknowledge that all human beings are equal in dignity and worth.

Christ models for us a tender care, concern, and compassion for the outsider, which we long to see reflected in our nation’s framework of laws and political culture. Many groups continue to be excluded from the respect and protection that a government owes to its citizens and that we all owe to one another.

Until all Americans can vote regardless of race or economic standing, until all can be free and safe from violence regardless of color, religion, or creed, and until all can enjoy the blessings of citizenship regardless of sex or gender, our democratic aspirations will remain only that–a hopeful vision of a lofty promise yet to be realized.

Notice how gently and lovingly Christ shows us the way to the banquet table, filled with family members we are yet to meet. Love and justice are commended to us, but never forced upon us; mercy and forgiveness are asked of us, but never extracted against our will. Notice how the highest, most profound virtues and values are set before us, the reward of taking the narrow road–and the choice remains ours.