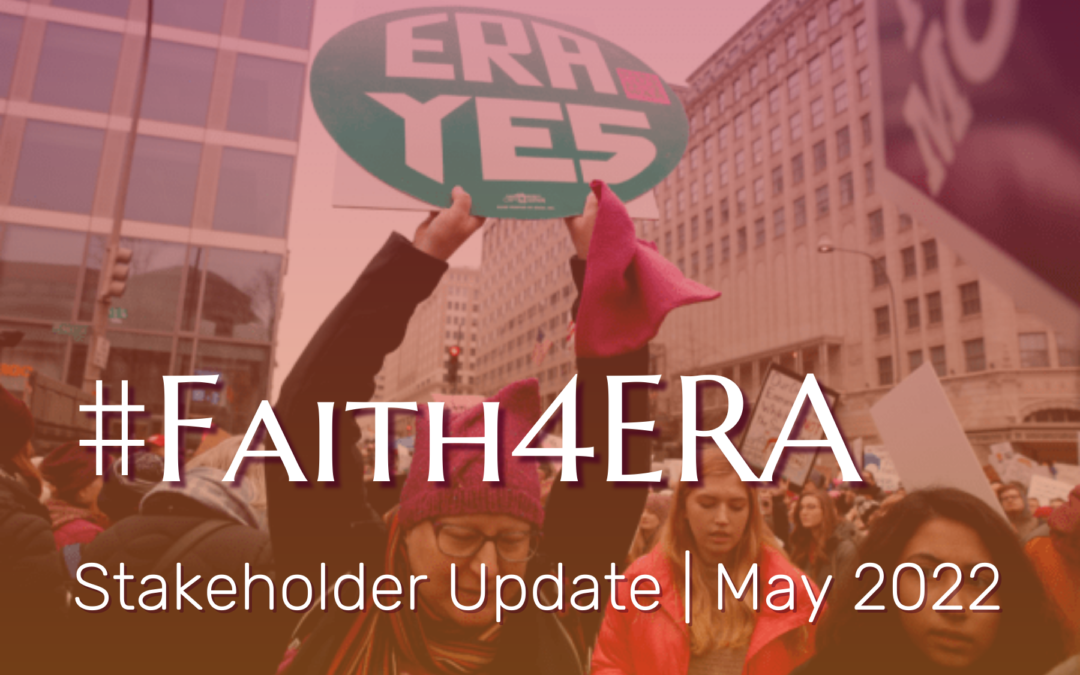 In the wake of the leaked Supreme Court draft opinion in Dobbs v. Jackson, our collective work to secure women’s equal citizenship is more crucial than ever. I’m writing to explain how this ruling affects the rights of women and LGBTQ+ individuals and to ask for your help moving the #Faith4ERA coalition forward.

Justice Alito, who authored the draft, relied on an “originalist” view of the 14th Amendment, referring to 1868 when women had no right to equal protection under the Constitution. He cited sources from an era when women had no legal personhood, and could be beaten or raped by their husbands with impunity. If this reasoning stays in the final opinion, it will pose an extraordinary threat to the constitutional rights of women and LGBTQ+ individuals.

Justice Scalia insisted that the Constitution does not prohibit sex discrimination, because women were not originally included under the Equal Protection Clause. Justice Kavanaugh, too, has shown hostility to women’s inclusion.  The draft Dobbs opinion heightens the risk that other conservative justices could agree with this “originalist” view—and roll back the last five decades of progress on gender equality. This would threaten hard-won victories to end sex discrimination in college admissions, government hiring, professional life, and beyond.

Literally everything is at stake for U.S. women and LGBTQ+ individuals. That’s why we’re fighting harder than ever to insist that all Americans count equally in our democracy.

For better or worse, we still see no clear link between the ERA and the right to an abortion. In the Dobbs draft opinion, Alito rejects the idea that sex equality provides a new basis for this right. Roe v. Wade, he notes, is not based on equality. Instead, it is based on the right privacy, rooted in the liberty protected by the 14th Amendment’s Due Process Clause.

Ruth Bader Ginsburg and other legal scholars have argued—in law review articles, amicus briefs, and dissenting opinions—that sex equality should provide a basis for reproductive rights. Many continue to do so. But this theory has never prevailed at the Supreme Court. The majority appears ready to reject it in Dobbs, with Alito saying it is “squarely foreclosed by our precedents.”

The battle over reproductive rights will continue in the U.S. Congress and at the state level–but we still have a chance to save women’s rights through the ERA! To champion the ERA is to address urgent problems women face every day–workplace harassment, pregnancy discrimination, sexual violence, and the gender wage gap. It is to address many serious underlying problems that often lead to abortion.

The next six months are crucial and we can’t do this work without the help of committed advocates like you. Thank you for considering how you can contribute at a critical time.