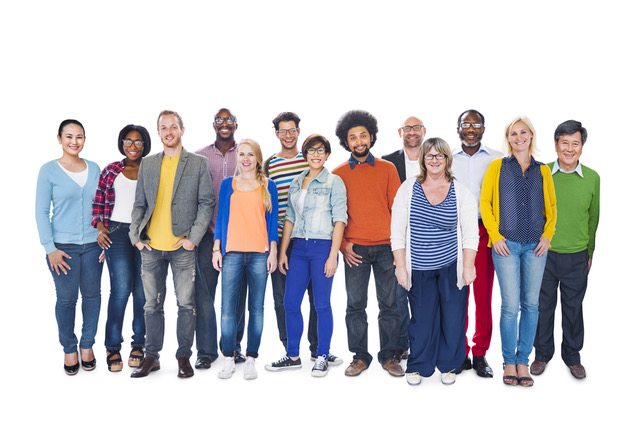 Its message was simple and timeless, but its portrayal of the human tendency to put people in boxes was powerful and timely. As immigrants fled life-threatening situations in other parts of the world, Denmark’s population began to swell, and with it, distrust among the diversity of new faces.

Stepping Outside of the Box to See Shared Humanity

The Danish ad, entitled “All That We Share,” challenges viewers to think outside the box. Instead of looking at outward appearances that impose false boundaries between “us and them,” it asks us to look inward at the heart, where boundaries dissolve into a common “we.” Our humanness is a shared experience, it suggests.

We all experience joy and pain; mad love and broken-heartedness; healing and loneliness; courage and fear. What connects us is much more powerful than what would divide us.

As Christians, Paul said the Galatians had a special obligation to look beyond social distinctions within their community and even outside of it. Eugene Peterson reimagines Paul’s words beautifully in the Message version of Galatians 3:25-27, “…Your baptism in Christ was not just washing you up for a fresh start. It also involved dressing you in an adult faith wardrobe—Christ’s life, the fulfillment of God’s original promise.” In other words, when we clothe ourselves in Christ we take on his characteristics—including his refusal to put people in boxes.

Jesus kept company with outcasts like tax collectors and Samaritans, those who were considered value-less members of society. He was moved to perform a miracle by the plight of the widow of Nain, a woman pushed to the margins of her community, whose son had just died. He healed those with diseases which had left them isolated from human family. Likewise, he taught us to love our neighbors as ourselves—including those we’ve put into boxes and judged accordingly. If we Christians have Jesus’ spirit in our hearts (Galatians 4:6), shouldn’t we train our eyes to see our neighbors like Jesus saw his?

Confronting the Injustice of Discrimination

That question has been posed many times since Paul’s instruction to the Galatians. In the mid-twentieth century, theologian and author Howard Thurman posed it to an American Christian audience in the face of the Civil Rights Movement. In the preface of his seminal work, Jesus and the Disinherited, Thurman wondered:

“Why is it that Christianity seems impotent to deal radically, and therefore effectively, with the issues of discrimination and injustice on the basis of race, religion, and national origin?”

As the Danish ad and Thurman’s piercing curiosity suggest, most people—including Christians—at times forget or lose confidence that our common human experience is more powerful than outward barriers we erect to divide us. So it is that in the Church’s long and varied history, we witness Christian advocates struggling for the inclusion of those on the margins, and Christian leaders defending a discriminatory status quo. We find Christian voices both opposing and defending human slavery, both decrying and justifying apartheid, both championing and resisting civil rights, women’s rights, and gay rights.

In hindsight, most Christians choose to identify with Rev. Dr. Martin Luther King, Jr. and the Civil Rights Movement of the 1950’s and 60’s, the Christian religious activism that famously forged changes in our laws prohibiting discrimination on the basis of “race, color, religion, sex, or national origin.” In hindsight, most laud similar achievements in international law, enshrining non-discrimination as a cornerstone principle of human rights. But it is vital that we live out these values today, and apply them to the challenges before us.

Thurman reminds Christians that once the love ethic of Jesus’ ministry is written on our hearts, we have no excuse not to love our neighbor “directly, clearly, permitting no barriers between.” Christ made no distinction among God’s beloved family, insisting that all belong, all are loved, all have worth.

Christians have a special responsibility, then, just as Paul told the earliest Christians, to strive to eradicate the barriers between us so that each person, created in God’s image and loved by God, might have meaningful life in community with each other.

When we clothe ourselves in Christ, distinctions of race, class, gender, national origin, or sexuality become far less important than “all that we share.”