A Lament over Racism, Violence & Hatred in America, & an Urgent Prayer for Justice 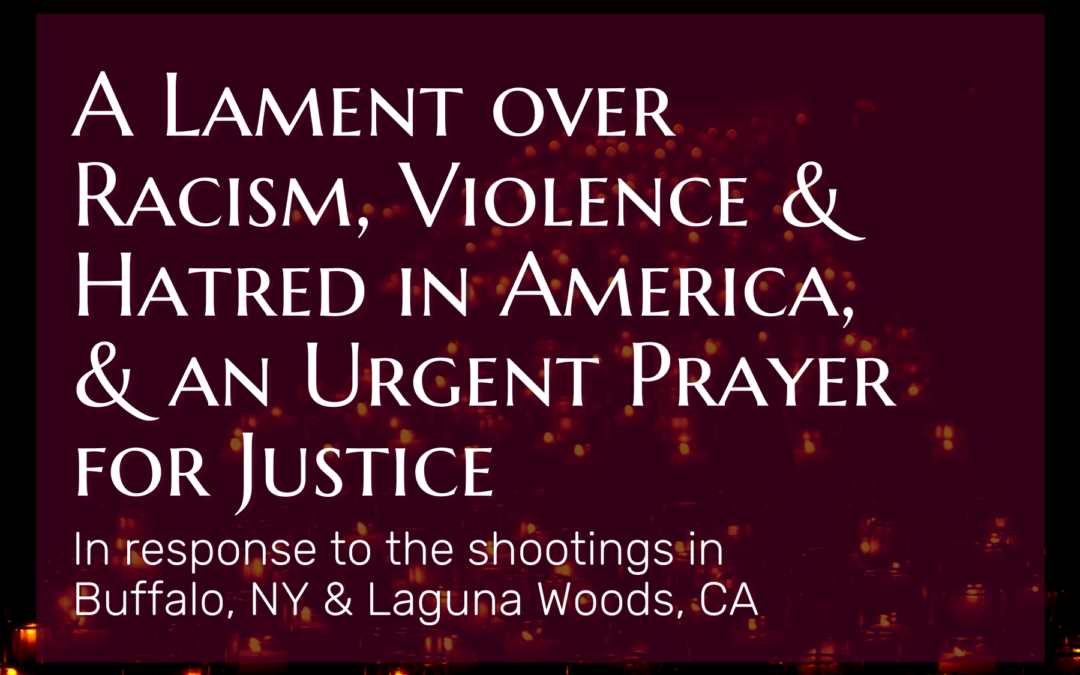 As our nation mourns multiple violent tragedies yet again, Justice Revival extends our deepest, heartfelt sympathies to the survivors and victims’ family members who are grieving mass murders in Buffalo, New York and southern California. We pray for comfort and healing for all whose lives have been torn apart by these hateful, destructive crimes. We ask for the peace of Christ to surround the souls whose lives in this world have been stolen. And we recommit to offering all that we have to help name and resist the evils of injustice, hold perpetrators accountable, and call this country to follow its better angels and highest ideals.

In Buffalo, we witnessed white supremacy taken to its violent extreme, as an ideology of hatred used to dehumanize Black Americans culminated in cruel, premeditated murder spree. This horrific incident reminds us of the urgent call to white Christians and all Americans of goodwill to repent of anti-Black racism and the nation’s enduring system of racial apartheid. The Gospel calls us to turn from the evil that has lamentably infected dominant streams of Christ’s Church throughout this nation’s history, as well as all ideologies of nationalism, nativism, and xenophobia toward communities of color.

We recognize that our nation is experiencing a troubling rise in hate crimes, the majority of which are racially motivated. Staunch and expansive U.S. commitment to freedom of speech has meant protecting language of hatred and dehumanization, which is always a necessary ingredient to acts of ethnic and racial violence. We pray that the Church will live out the Gospel‘s call by exemplifying loving speech that always builds up and does not tear down or subjugate. As Christians, we must hold our public leaders accountable to forswearing hateful language, demonization of any group or class, and the stoking of bitter divisions. As Dr. King preached, “Hate cannot drive out hate; only love can do that.”

We acknowledge that American obsession with firearms has given rise to a culture of gun violence unique throughout the known world. We puzzle and grieve over the undeniable pattern of male violence being the proximate catalyst of a brutal cycle of mass murder. Twin evils of white supremacy and patriarchy have long structured the hierarchies of a U.S. society crafted by dominant men. Our sincere prayer is that brothers and sisters who profess Christ will come to know the Savior who said, “I am gentle and humble in heart,” and the Apostle who told us always to clothe ourselves in humility, and “consider others better than yourselves.” The way of dominance and violence is never the way of Christ.

Justice Revival was founded specifically to provide a corrective, a counterweight, and an alternative to the white Christian Nationalism and Christian patriarchy that are expressed so openly today. We will continue to seek the wisdom of our scriptures and faith tradition to develop and express a Christian ethic that is fully egalitarian and inclusive—a vision of Beloved Community where people of every color, race, gender, language, and origin are welcomed to the banquet as one glorious human family, valued in celebration and not in spite of our unique differences. Our humanity is inextricably intertwined, our hopes for liberation bound up together

As followers of a God who loves justice, we at Justice Revival recommit to pursuing an end to:

We lift up these thoughts, prayers, and intentions to our loving, merciful, just and holy God, in whom alone we believe such radical transformation is possible. May we be willing servants of our heavenly Creator’s design to continue redeeming our broken nation and world.