Making the Case for Equality in the Senate: The Work Continues 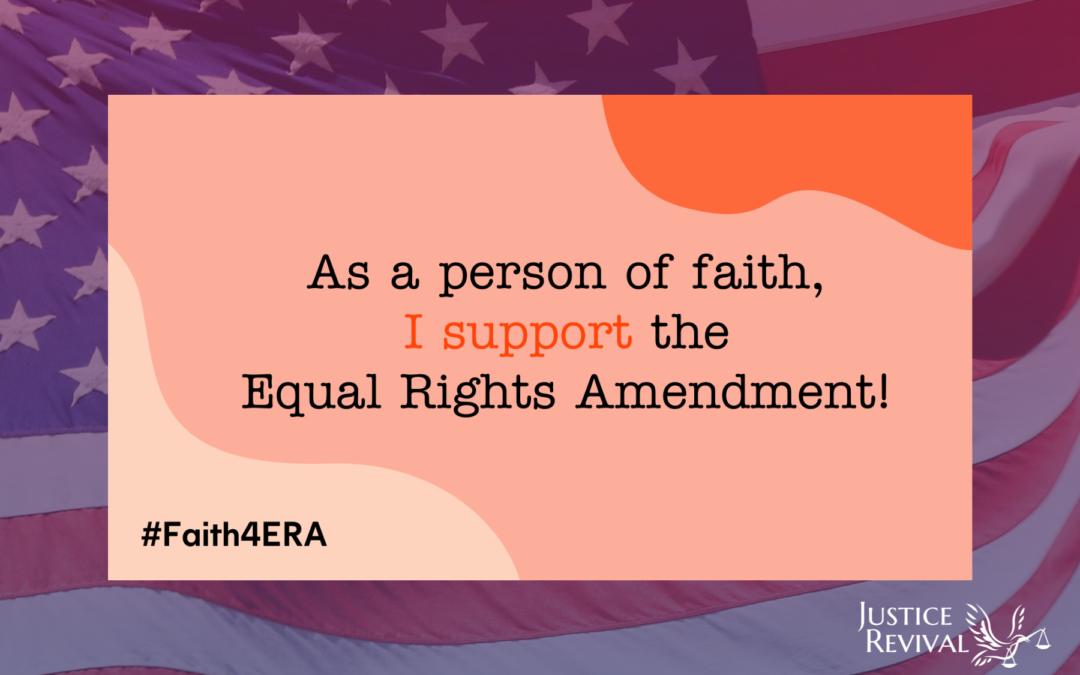 Over the past two weeks, Justice Revival and #Faith4ERA campaign partners held a series of advocacy meetings in support of legislation (S.J. Res. 1) to eliminate the arbitrary timeline for ratification of the Equal Rights Amendment, in the first set of #Faith4ERA Advocacy Days. The House passed an identical bill (H.J. Res. 17) in March. Now that the requisite 38 states have ratified the ERA, this deadline—which would be eliminated by the passage of S.J. Res. 1 in the Senate—is the sole barrier to the ERA being officially recognized as the 28th Amendment to the U.S. Constitution.

With the support of some 21 faith advocates in-state, we made the case for equality with the offices of Sen. Burr (NC), Sen. Toomey (PA), Sen. Capito (WV), and Sen. Portman (OH). We felt it was of the utmost importance to communicate the moral conviction that unites the #Faith4ERA campaign to the senators—that every person has divine worth, and deserves dignity and respect in the form of equal rights.

The advocacy meetings were followed by a “Tweetstorm,” in which our partners and numerous #Faith4ERA constituents worked to add positive public pressure in support of the ERA. Through a deluge of tweets, we thanked senators who already support or have cosponsored S.J. Res. 1 and urged others to do the same.

Having now formed a relationship with several Senate offices, the #Faith4ERA campaign will continue working into the fall to persuade senators to support S.J. Res. 1.

Eliminating the Arbitrary Deadline for Ratification

One of the issues that Senate staff members asked us about is the legality of eliminating the timeline for ratification of the ERA. As our friends at the ERA Coalition have argued in support of a federal lawsuit aimed at finalizing the ERA, it is not clear that the ratification deadline imposed by an earlier Congress—in a joint resolution, not within the body of the amendment itself—is binding. Regardless, if Congress has the power to impose ratification deadlines for amendments in the first place, and later amend them (as it has already once done for the ERA), this demonstrates that it also has the power to remove them. The U.S. House has thus passed bills twice (in 2020 and in 2021) to do just that.

Passage of Time and the Adoption of the ERA

The amount of time that has passed between Congress adopting the ERA in 1972 and Virginia becoming the 38th state to ratify in 2020 is not a barrier to ratification, either. Article V—the section of the U.S. Constitution detailing the ratification process—does not mention the passage of time being a barrier for the adoption of amendments. After all, the 27th Amendment (also known as the Madison Amendment) was adopted in 1992, over 200 years after its passage by Congress. The bottom line—the need for true equality for all Americans is ultimately more important than procedural technicalities.

My Role as the Advocacy & Mobilizing Coordinator

As the Advocacy & Mobilizing Coordinator for the ERA at Justice Revival this summer, I have watched the #Faith4ERA campaign double to eleven partner organizations and 500 signatories on the Interfaith Statement of Support. I am inspired by the commitment of these organizations and individuals to realizing a better world in which all people are equal under the law, as they are in God’s eyes. People of faith will continue to have an important role to play in voicing support for the ERA, and it is my prayer that the #Faith4ERA campaign will continue to grow as more people dedicate themselves to doing just that.

The Work Continues: Help Realize the Vision for Equality

As I reflect on the work I have done this summer, I am struck by the fact that advocates have been fighting for the ERA for over 150 years. I feel blessed to have been able to play a small role in this tremendous and long fought effort.

You, too, can help realize the vision for equality by signing the Interfaith Statement of Support as a U.S. faith leader, joining the #Faith4ERA campaign or broader ERA Coalition as a partner organization, or reaching out to your senators to tell them why the ERA is important to you. After 150 years, I am heartened to think 2021 just might be the year for equality! For now, the work continues.