Highlights from the Event “Truth and Transformation: Uprooting Racism and Reimagining Policing in the United States” 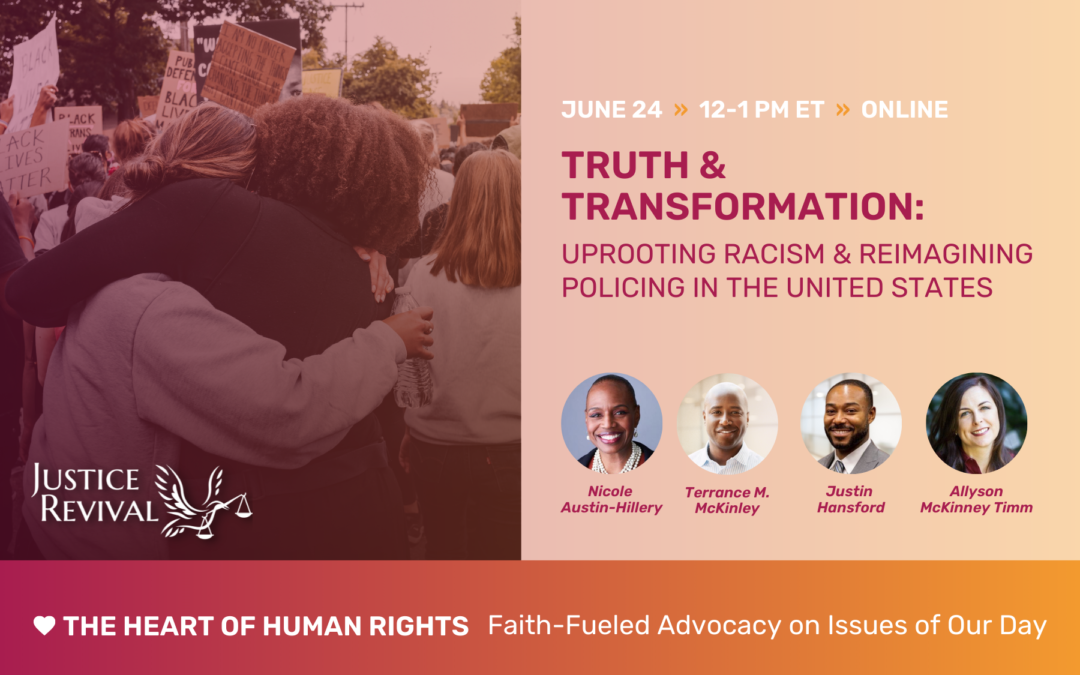 The one-year anniversary of George Floyd’s death at the hands of a Minneapolis police officer came and went without the passage of meaningful federal legislation. The harm done to George Floyd and his loved ones cannot be undone. Unfortunately, the best one could hope for is accountability: woefully inadequate compensation for a lost life. The only path to true justice is to prevent these tragic killings from ever taking place.

Out of the darkness of that day sprang a glimmer of hope: hope that the haunting images a nation bore witness to would birth transformational change. The initial fervor for action, which spanned the political spectrum, provided the opportunity to meaningfully reimagine the role of policing in our communities. Sadly, that spark of political will dissipated and the once broad coalition fractured. Unsatisfied with the inadequate response from domestic lawmakers, grieving families who lost loved ones to police killings looked to international human rights bodies to address the long neglected violations of their rights.

Ms. Nicole Austin-Hillery of Human Rights Watch, Professor Justin Hansford of the Thurgood Marshall Center, and Rev. Terrence McKinley of Sojourners spoke with Justice Revival founder Allyson McKinney Timm at the recent web-based event, “Truth and Transformation: Uprooting Racism and Reimagining Policing in the United States.” The conversation covered the current state of discriminatory policing, appeals to the international human rights community, calls for transformational reform, and the role faith communities can play in bringing about change. Watch the full video here and read on for highlights.

Though police violence has persisted through decades of insufficient reforms, a global perspective shows the problem need not be intractable. Far fewer people are killed by police in other wealthy democracies. For instance, over the past decade, 22 people were killed in England and Wales. In the U.S., on the other hand, police kill an average of 19 people per week. Acknowledging these realities, as Hansford points out, is a necessary part of finding a solution:

One way to measure whether the U.S. is making progress in addressing our broken systems is our level of respect for our international human rights commitments. The U.S. is a party to several binding international treaty agreements protecting civil rights and promoting the right to be from discrimination. UN bodies offer guidance to ensure law enforcement standards are in compliance with these legal obligations. Two key pillars of this guidance are that (i) law enforcement should only use lethal force as a last resort, and (ii) there must be effective mechanisms in place to achieve accountability for police misconduct.

Ms. Austin-Hillery also called upon the faith community to be “justice warriors” in the fight to protect and promote human rights. One way to join the fight is to support the strongest possible version of The George Floyd Justice in Policing Act (JPA), which passed the House (as H.R. 1280) earlier this year and is currently being negotiated in the Senate.

The JPA, if passed in the same form as the House bill, would bring the U.S. closer to complying with international standards. The bill would, among other important reforms, heighten use of force standards so that federal law enforcement could only use lethal force as a last resort—as required by human rights law—and create financial incentives for states to enact the same standard.

The JPA would also remove barriers to holding law enforcement accountable for misconduct, by changing the federal standard for criminal liability from “willfully,” which is extremely difficult to prove beyond a reasonable doubt, to “knowingly and recklessly.” The bill would end qualified immunity for law enforcement officials, a judge-made doctrine that prevents officers from being held accountable for constitutional violations in most circumstances. This would enable individuals to recover damages in civil court when law enforcement officers violate their constitutional rights.

Rev. McKinley reminds us that police violence is a theological issue in addition to a legal one. The inherent dignity and value of each individual compels us, as people of faith, to protect life. All of the panelists agreed that communities of faith have an important role to play in advocating for human rights, including the right to live free from racialized police violence.