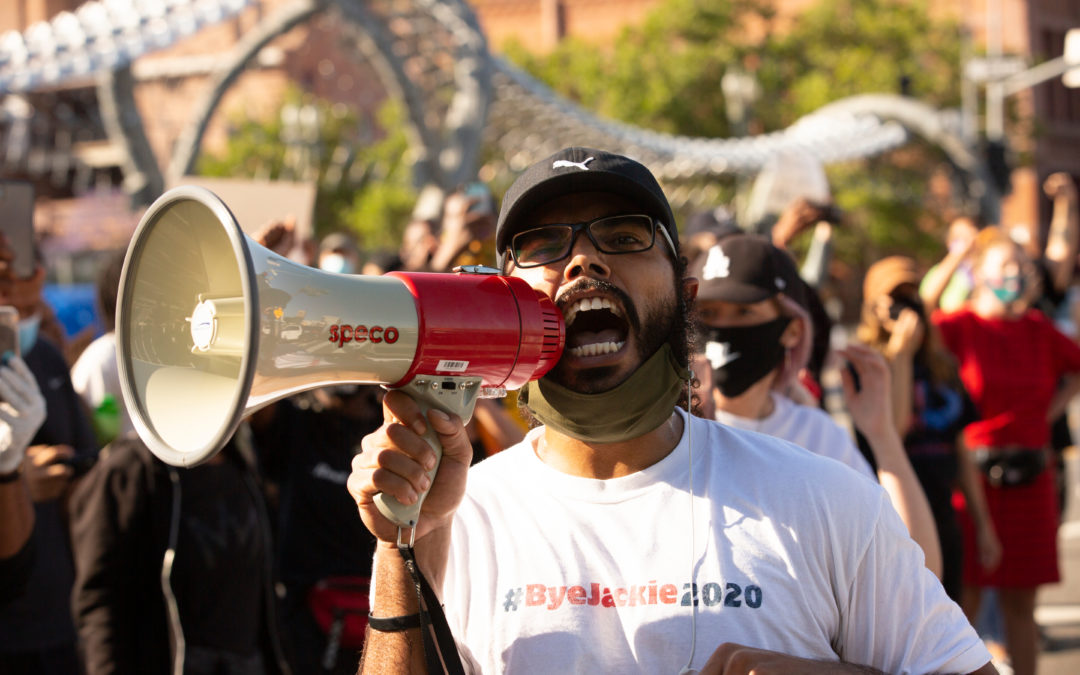 George Floyd’s death at the hands of Minneapolis police—the cruel, unjustified killing of yet another Black man by White officers charged to protect and serve—is a mournful window into America’s shameful human rights crisis.

If the inherent right to life venerated in our founding documents and celebrated as the supreme human right means anything, it must mean that our government cannot use its monopoly on coercive force to recklessly snuff out the lives of its own people. It must mean that the systemic racism infecting our public institutions—which has proven deadly to black and brown Americans—is treated as a threat to human dignity and human life.

The video showing how police overwhelmed George Floyd—and the lethal consequence of their actions—documents an agonizing, persistent social trauma in our nation.

Floyd is prone on the asphalt street, arms bound behind him, an officer imposing the weight of his body on Floyd’s neck as he pleads for mercy. “I can’t breath,” he gasps.

Witnesses cry out in lament and protest, alarmed at the excessive force. Whatever reason police may have had for apprehending George Floyd, they had obviously succeeded: he was firmly in their custody. Yet they inflicted grave bodily harm–one officer through his inhumane actions, the others through their galling indifference.

The prophet cries out: “The Lord looked and was displeased… the Lord was appalled that there was no one to intervene.” (Isaiah 59:15-16)

Is it any wonder that an injustice appalling to the Creator of humanity would incite rage and backlash among those who have suffered for so long, witnessing repeated incidents of unholy disregard for their very lives?

As many have made clear, the root of the problem is pervasive systemic racism four centuries in the making–a shameful, unhealed scourge of our democracy.

An Inherent Right to Life

Minneapolis City Councilwoman Andrea Jenkins rightly proclaimed, “This is about the violation of human rights.”

Our government has promised to safeguard the inherent right to life of every human being. This right is recognized in our Declaration of Independence and Constitution. We’ve ratified multiple human rights treaties that protect it. We’ve pledged that this right (like others) is to be enjoyed by all people equally, without discrimination, including based on race, color, or ethnicity.

This means, first of all, officials must respect life. For police this means using only force that is absolutely necessary and is tempered to the needs of the situation.

One struggles to imagine what risk the unarmed, shackled Floyd posed to the no less than four armed policemen surrounding him. There is no hint he was a threat to others or poised to escape, no indication any force was warranted–either in the video of his demise, or security footage of his apprehension.

The “freedom from fear” famously invoked by Franklin D. Roosevelt was a founding purpose of the human rights movement. This phrase evokes Isaiah’s vision of a peaceable kingdom, where everyone will lie down in a vineyard of their own, and no one will be afraid. Yet people of color in the U.S., Black men in particular, have reason to shudder at the prospect of a police encounter.

In the mistrust fueled by this betrayal, we all lose. We lose the integrity that comes with living by our nation’s avowed principles, and our own. We lose the security of living in communities where police are a source of safety for all families. We lose the fellowship of reconciliation to which Christ calls us, as racial divisions are redoubled and skepticism of the other stoked.

But to be clear, those who bear the eviscerating weight of this systemic injustice are African-American men, whose bodies are criminalized and earthly potential is stolen. They are the wives, mothers, fathers, and friends who mourn them. They are the traumatized bystanders in Minneapolis, who witnessed a tragedy they could not stop. And they are the protesters raising a moral voice for justice and life, wrestling with righteous anger as they call our nation to do better.

Every one of these souls deserves the freedom from fear that God intended for all of us. They deserve not just respect, but love and honor, as people dear to God.

The Struggle for Justice

Recently, I’ve heard a number of Black friends and colleagues say they are weary of the longstanding burden of speaking out on racial injustice, unsure how yet again to channel the righteous outrage these episodes of police brutality evoke.

It’s past time for those of us not directly threatened to step up and join this fight. This week the mayor of St. Paul, neighboring Minneapolis, reminded me we are all needed in this struggle. He called on seniors, White women, and everyone available to join the fight. Whatever heritage we claim, we share human kinship with the late George Floyd, may he rest in peace.

The firing of the officers responsible was but a first step on the long road to justice. Even more vital will be the investigations that follow, accountability of the officers under law, and recompense for Floyd’s family.

The justice this case merits should be far-reaching. Our government’s duty is not only to respect the human right to life but also to protect and promote it. Avoiding harm is mandatory but it’s not nearly enough; the government must do what’s required to end the wrongful killing of Black men in America. Impending FBI, DOJ, and local investigations are good things, but recognize that this is the government’s basic duty. If the U.S. government fails to diligently investigate, hold the perpetrators accountable, and ensure a legal remedy for Floyd’s survivors, it is complicit.

It’s been six years since Eric Garner’s death, and fourteen at least since global authorities began urging the U.S. to address systemic racism in American policing. For anyone who considers human life sacred, now is the time to say so.

Faith communities looking to take action are also encouraged to explore the A.C.T. Now to End Racism campaign led by the National Council of Churches and the Isaiah 58 Fast (beginning May 30th) led by Civil Righteousness.

For more detailed analysis of the human rights violated by racialized police violence, see the 2018 report by the Inter-American Commission on Human Rights: Police Violence Against Afro-descendants in the United States.