Dignity, A Matter of Life or Death 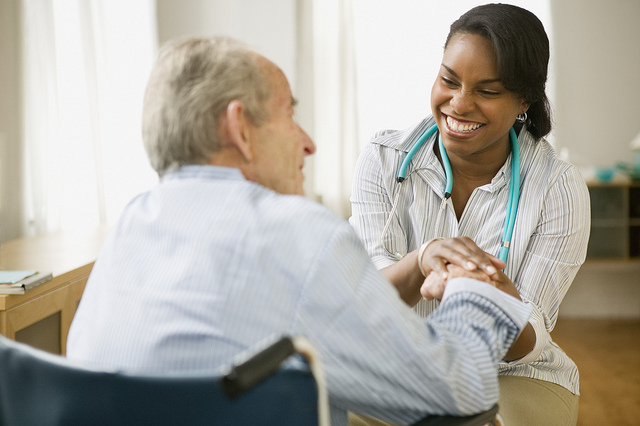 As a chaplain-in-training at a major inner-city trauma center, I sat with countless traumatized people: those suffering from grave illness and injury; their families and friends; and doctors and nurses who were charged with their care. Each person had a story to tell, and I was there to hear and honor them, tending to spiritual health just as the medical staff tended to physical or mental health.

Whether the stories were marred by tragedy or marked by virtue of a life well-lived, the stories—and the people defined by them—were offered the same measure of dignity. It was understood that everyone who entered was “worthy” of care simply because they were human. No other defining characteristic or life story mattered.

As a result, prison inmates shackled to their beds were treated with indiscriminate care in the Emergency Room. The same was true of arsonists who were burned beyond recognition by their own flames; and homeless people with imagined illnesses who needed nothing more than a warm bed, a meal, and the balm of human kindness. Victims of unspeakable abuse were admitted, and sometimes their perpetrators too.

Once, a family of five were air lifted to the trauma center after their car was struck by a drunk driver. One child and the intoxicated driver died from injuries they sustained in the crash. I heard the mother’s primal wails from one trauma bay as I witnessed nurses carefully tending to the deceased driver’s body in another—washing it and situating it in a dignified position on the bed before summoning me to call his family in to break the terrible news.

On my way to the waiting room with the doctor, I wondered what dignity was owed to this person whose reckless behavior took the life of an innocent child, inflicting a life sentence of unimaginable pain for his family. In my head I knew the answer, but my heart wasn’t so sure.

In that moment of head-to-heart dissonance, it struck me that the hospital might be one of the few places earth where dignity is the defining standard of practice—even when offering it is confounding and counter-intuitive.

Chaplaincy work raised many questions for me: what if we treated each other with the same kind of dignity outside the hospital walls, where it isn’t a question of life or death? What is my responsibility as a Christian to honor and preserve dignity even when life’s stories are tragically complicated?

The Weight of Human Dignity

These questions led me to investigate the concept of dignity, and to the work of renowned conflict resolution expert, Dr. Donna Hicks. Dr. Hicks contends that dignity is a question of life or death—not just in the hospital, but everywhere, every day. In fact, protecting human dignity is at the very heart of the UN Universal Declaration of Human Rights: “…recognition of the inherent dignity and of the equal and inalienable rights of all members of the human family is the foundation of freedom, justice and peace in the world.…”

In Dr. Hicks’ experience, human failure to recognize the dignity of another can, at worst, result in deadly conflict and atrocious crimes against humanity. Yet, when human dignity is upheld, it can present opportunities for restorative justice, reconciliation, and healing. Her curiosity about the potential impact of dignity on the world stage led her to consider what it would look like to treat each other with dignity in all our relationships. That question was the impetus for the development of her “Dignity Model,” a ten-point description of dignity’s attributes, and potential hindrances.

Dr. Hicks is careful to make an important distinction between dignity and respect, which are often confused. Dignity is inherent; that is to say that we all deserve to be treated with dignity simply because we’re human. Respect, on the other hand, is earned. That is to say, the recognition of another’s dignity does not require us to respect that person’s behavior. In practice, dignity looks like the nurses who carefully prepared the drunk driver’s body, even though his behavior did not earn their respect.

Christian scripture teaches us that each and every one of us matters; even one lost sheep is worth saving. Jesus commands us to love one another in the same way the shepherd cares for his sheep; affirming each other’s worth is the lived reality of the story of the lost sheep—inside and outside of the hospital. My time as a chaplain left me with unanswered questions, but I concluded that dignity is a powerful preventative and healing force!

Last week the non-partisan Congressional Budget Office (CBO) and Joint Commission on Taxation (JCT) estimated that as the proposed American Healthcare Act stands now, “…in 2018, 14 million more people would be uninsured under H.R. 1628 than under current law.” The number grows exponentially in subsequent years, potentially leaving as many as 51 million without access to healthcare in 2026.

If, as I suspect, hospitals are among the few institutions in America where the power of dignity is harnessed as standard practice, restricting access to healthcare is akin to denying dignity. While health care providers faithfully strive to honor the dignity of all, our nation struggles to acknowledge the human right to health care that is a logical result of this respect for human dignity. The irony of the contrast is striking: healthcare professionals are a bastion of respect while our politicians and leaders fail to craft policies that do the same.

Christians have a responsibility not only to live by a standard of dignity on a daily basis, but to advocate for access to dignified healthcare for everyone.

While the cost savings to tax payers under the proposed healthcare act are measured in dollars, dignity cannot be so easily measured. Dr. Hicks affirms, “…we know the full value when we see our own dignity reflected back in the eyes of others.” In the hospital, where divergent stories abound, the practice of the golden rule is on full display as a matter of life or death. As Christians, the parable of the lost sheep is our common story and the very thread that binds all others together. May we preserve dignity as if our physical and spiritual lives depend on it.