Revisiting the Bible with a Fresh Lens of Liberation 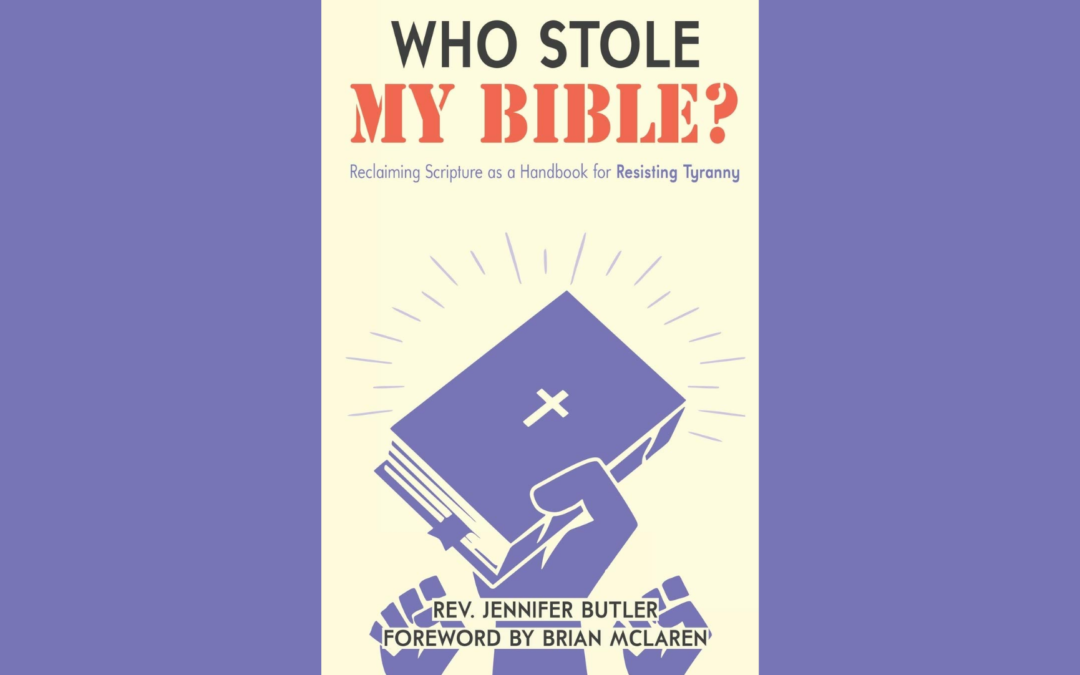 A Review of Who Stole My Bible: Reclaiming Scripture as a Handbook for Resisting Tyranny by the Rev. Jennifer Butler

For those of us who grew up in mostly white Christian churches in the United States—part of a privileged, dominant racial and religious majority, in a wealthy superpower of a nation—it may be difficult to hear in scripture the meanings its authors and earliest audiences would have perceived. It takes thoughtful effort, after all, to empathize with someone in a vastly different context, whether that is a beleaguered people group, like the ancient Israelites, in a different region of the globe; a fledgling, persecuted religious minority, like the early church under the Roman Empire; or a marginalized sub-culture in the world today that lies far from one’s own experience.

The Rev. Jennifer Butler’s new book, Who Stole My Bible, helps to make such empathy and insight more possible, however, and through the lens of the oppressed, both historic and contemporary, sheds welcome fresh light on the good news of the Christian Gospel.

Her work takes an admirably creative format, in which each of the central chapters combines imaginative re-telling of a bible story, scholarly insights on meanings of the text, incisive application to our present-day social and political realities, and hopeful examples of the prophetic witness of dedicated advocates Rev. Butler has partnered with in her ministry. The result is a refreshingly accessible biblical hermeneutic of liberation that stands as a powerful counterweight to the unfortunate (if not uncommon) misuse of scripture to reinforce problematic structures of power.

Like a gifted preacher in the pulpit, Rev. Butler displays a knack for conveying gems of insight hewed from biblical exegesis in a way that comes alive with relevant meaning for the everyday reader. Comparative literature of the Ancient Near East, for instance, is synthesized into a lucid worldview of violent struggle in her exposition of the Enuma Elish—one that serves as illuminating foil to the creation account of Genesis, in which humankind images God is named by God as “very good.” Her book is helpful for readers who may be encountering such literary or historical analysis for the first time, as well as seminarians and seasoned pastors thirsty for a newly vivid and meaningful explanation of key insights from biblical scholarship.

Rev. Butler invites readers to explore scripture through the eyes of marginal characters both in the text and in our world today. Using the art of storytelling to situate her reader in another’s shoes, she offers the gift of fresh perspective on well-known bible stories and renewed sensitivity to others’ spiritual and material needs. Did the midwives who saved Hebrew baby boys remain with the community through the desert and participate in the covenant with God at Sinai? In Rev. Butler’s telling at least one did, and that midwife’s perspective matters, we are made to realize.

A Compelling Critique of Authoritarianism

In our current political moment, Who Stole My Bible yields a compelling and well founded critique of a presidential administration that has shocked the nation and world with its moves from away from the democratic liberties of open society toward authoritarian nationalism; its religious apologists are necessarily implicated, too. The 45th president’s tightening grip on power and disregard for the fate of the vulnerable cannot be squared with a salvation narrative that begins with the sacred value of humanity, develops with prophetic attention to the widow and orphan, unfolds with good news to the poor, and culminates with the humble, self-giving love of divine sacrifice. Rev. Butler offers us the evidence to say this with confidence.

There were some moments, however, when I wondered if Rev. Butler sought to read more into the ancient text than it comfortably can hold. Language of human “dignity” and “equality” is familiar to our modern ears and integrally related with our contemporary concepts of justice. While I agree fully that scripture offers the essential foundations of these vital ideals, it is also true that the biblical authors and characters would not have understood these notions the way we do today. That said, Rev. Butler does so much to develop meaningful connections between the ancient text and our modern context, struggles against oppression old and new, and the power of prophetic example then and now, that a more fulsome intellectual history of democratic ideals is understandably beyond the scope of this work.

On a Faith Journey with Biblical Interpretation

One of the most inspiring aspects of the book for me was the glimpse into Rev. Butler’s own spiritual journey and life as a leader in faithful advocacy. She is candid about ways she heard the bible misused, how her spiritual intuition inspired a search for deeper understanding, and some of the trials and breakthroughs of her formidable ministry for justice. For those who sense that the bible has more to say about injustices of our day than they may have heard so far, or who long for an encounter with scripture that speaks hope to the oppressed, Jennifer Butler shows the way.