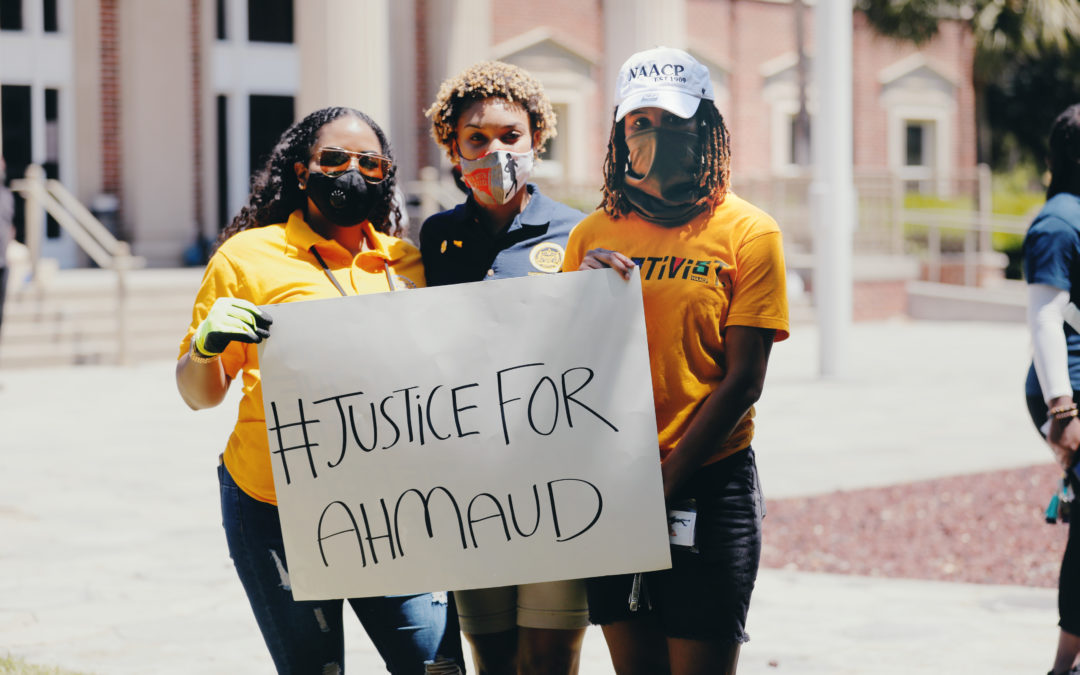 And Facing Down Legal Threats to Black Lives

Last Wednesday, a grand jury indicted the three Georgia men who harassed, chased down, and killed Ahmaud Arbery in broad daylight. Each of the defendants was indicted on nine counts, the most serious being “malice murder”—intentional killing with malice aforethought. After months of delay and the recusal of two prosecutors, the possibility of justice for Arbery’s death—which helped spark weeks of transnational protests over racism in the U.S. criminal justice system—is a real one.

Legal hurdles remain, however, in the longstanding struggle to protect Black lives by holding those who commit lethal crimes against African-Americans accountable. Prosecutors will have to overcome citizen’s arrest, stand your ground, and gun carry laws in order to secure justice in this horrific case of racial violence.

In Georgia, where Mr. Arbery was killed, a citizen may make an arrest for a crime if it is committed in his presence or if it is “within his immediate knowledge.”

Why should an individual with no law enforcement authority or training be allowed to make an arrest? In fact, “citizen’s arrest” laws are vestiges of their medieval origins, not appropriate in the 21st Century United States.

As one scholar explains, “[c]itizen’s arrest arose… as a direct result of the lack of an organized police force and practical modes of transportation to get to the scene of a crime expeditiously.” When the English colonized North America, they brought citizen’s arrest law with them.

Traditionally, this legal principle had limitations. It applied only to crimes committed in the presence of the citizen arrestor. Moreover, the arrestor could be held liable for false imprisonment if no crime had actually been committed by the person detained.

Many states have narrowed or eliminated these common sense limitations on citizen arrest laws—like Georgia, where the law allows a citizen with “reasonable and probable” grounds to suspect a crime has been committed to make an arrest. The second prosecutor in the case against Arbery’s killers argued such was the case here, in an impassioned and improper memo he wrote despite having to recuse himself.

“Stand Your Ground” without Limit

How could a “stand your ground” law be relevant here, when the two attackers were shown on film chasing down Mr. Arbery?  Once again, a medieval legal principle has expanded far beyond its original purpose.

Traditionally, a person faced with a physical threat could defend himself, but had a duty to retreat, if possible, rather than use deadly force. In other words, George and Travis McClintock would have had to run away before turning their guns on Arbery. Over time, however, an exception that said there was no duty to retreat in one’s own home came to swallow the general rule.

Georgia law has no duty to retreat, and allows use of deadly force if a person reasonably believes such force is necessary “to prevent death or great bodily injury” or prevent a felony. Some 29 states have enacted similar stand your ground laws (ominously called “shoot first” laws), and another seven arrive at the same rule “through a combination of statutes, judicial decisions and/or jury instructions.”  Almost all of these laws have been enacted since 2005, at the behest of the NRA and its financial backers.

The “stand your ground” defense is not meant to protect someone who picks a fight, as Arbery’s killers did. But racial bias plays an invidious role, as it does throughout our criminal justice system. White violence against Black people is 281% more likely to be deemed “justified” than in cases where both parties are White.

The third element in this noxious mix consists of laws allowing civilians to carry guns in public. Over the past thirty years, as a result of fierce lobbying, reasonable gun regulation (such as permit requirements) has been weakened or eliminated in many states. Restrictions on civilians carrying guns date back to the 17th Century and “were common in the American western frontier.” The relaxing of gun restrictions represents a “move away from America’s gun regulation tradition.”

When prosecutors seek to hold Mr. Arbery’s killers criminally responsible for taking this young Black man’s life, they will need to face down this unholy trinity of citizens’ arrest, stand your ground, and open carry laws. Their arguments may look something like this:

Where Do We Go From Here?

We hope and pray for justice to be done in the case against Mr. Arbery’s killers, through fair and unbiased prosecution. Accountability for his murder would be one humble step toward protecting the universal human right too often still denied to Black Americans—not to be arbitrarily deprived of one’s life.

As a group of prominent human rights experts recently told the United Nations: “The last few moments of Ahmaud’s life involved pursuit by a lynching party identical to the lynching parties of the Jim Crow era.”

This cannot be permitted in today’s America.

More broadly, there is work to be done to protect people of color and everyone in this nation from the deadly American equation of gun carry, citizen’s arrest, and stand your ground laws. Legislators need to roll back or eliminate citizen’s arrest laws, restore common sense limitations to stand your ground laws, including a duty to retreat, and pass sensible gun safety regulations.

We all need to do the hard work of uprooting the racism in our systems and our selves. If Ahmaud Arbery had been legally armed and used his weapon successfully to defend himself against the McClintocks’ assault, how likely is it that today’s criminal justice system would have put this young Black man in prison or on death row for defending his own life?