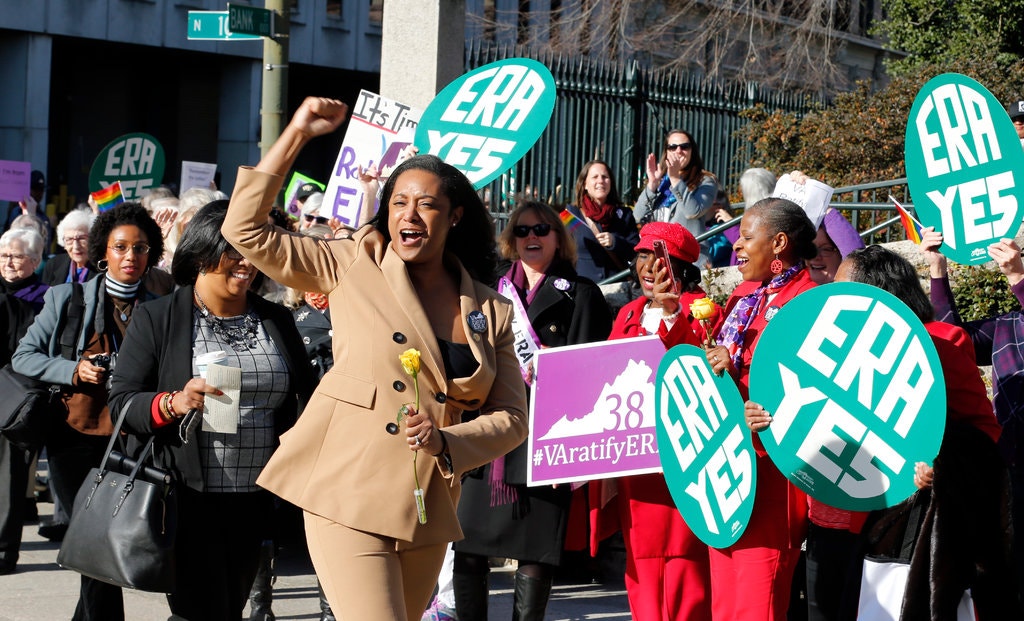 Last Wednesday, Justice Revival and Union Theological Seminary in New York City joined a diverse coalition of over fifty civil society groups that signed a “friend of the court” brief in support of the Equal Rights Amendment. Winston & Strawn, LLP filed the amicus brief on behalf of the ERA Coalition, urging a federal court to allow a lawsuit brought by Illinois, Nevada, and Virginia–three states that have ratified the ERA over the last three years–to continue. The case presses the National Archivist to recognize the ERA as an amendment to the U.S. Constitution, now that 38 states have ratified it. Read the full brief here.

The brief makes a resounding case for the ERA, and the wide support it garnered reflects the growing movement for the ERA’s adoption.
First introduced by Alice Paul in 1923, the Equal Rights Amendment was passed in its current form by Congress in 1972. It provides that, “rights shall not be denied or abridged… on the basis of sex.”

Equality before the law is a basic, foundational human rights measure, and the vast majority of the world’s constitutions include some provision ensuring women’s rights or prohibiting gender discrimination. The U.S. is one of only 18 nations lacking such protections.

In January of this year, Virginia became the 38th state to ratify the ERA, meaning the three-quarters of states needed for adoption of a Constitutional amendment have given their approval. Last week’s amicus brief supports a lawsuit brought by three of those states, urging the National Archivist to certify and publish this long overdue update to our founding document.

Faith Support for the ERA’s Recognition

Justice Revival and Union Theological Seminary are two of seven religious organizations among the fifty-plus groups that participated in the brief. The presence of Catholic, Jewish, Mormon, and ecumenical organizations underscores interfaith accord on the value of women’s human rights in our democracy.
Ensuring all people are afforded full and equal rights before the state is a necessary measure, if our goal is to treat all people justly, in a way that honors the inherent, God-given human dignity and worth of each individual. Raising awareness among faith leaders and encouraging broader faith support for the ERA remains one of Justice Revival’s key goals in 2020.

Pressing Problems of Injustice to Women

The current, ongoing public health and racialized violence pandemics have exposed the heightened risks women continue to face within our social and governmental structures, despite women’s integral role in every sector of society.

One in three jobs held by women has been deemed essential since COVID-19 hit the U.S., and nonwhite women–subject to lower access to healthcare and lower wages–are more likely to hold such jobs. The CDC reports that women make up 73 percent of the U.S. health care workers who have been infected since the outbreak began. Yet women continue to earn an average of 80 cents on the dollar compared to men, and women of color fare far worse.

African-American women are often systematically overlooked as victims of racialized police violence, as emphasized by the #SayHerName campaign through the African American Policy Forum and Center for Intersectionality and Social Policy Studies.

Recent data attests to the skyrocketing rate of women being incarcerated. Our criminal justice system frequently neglects the basic needs of Native American, Latinx, and LGBTQ women in custody–or, more gravely, leaves them vulnerable them to sexual violence, according to one recent study.

Securing women’s rights in the Constitution will further empower Congress to legislate on these and other urgent national issues of gender-based injustice, and will make it harder for discrimination to survive legal challenges in our courts.

Alice Paul announced her unwavering dedication to the Equal Rights Amendment in 1923, on the 75th anniversary of the Seneca Falls Convention. By the time the centennial anniversary of her historic announcement arrives in 2023, let’s hope we can celebrate the United States as a nation that includes the female half of its population in its governing Constitution, and grants all people the fundamental rights and freedoms to which we are entitled.

You can still join the ERA Coalition and advocate before Congress, the courts, and the general public on the necessity and wisdom of this basic human rights reform. To learn more about how you or your community can advance the cause, visit the ERA Coalition or reach out to us at Justice Revival.